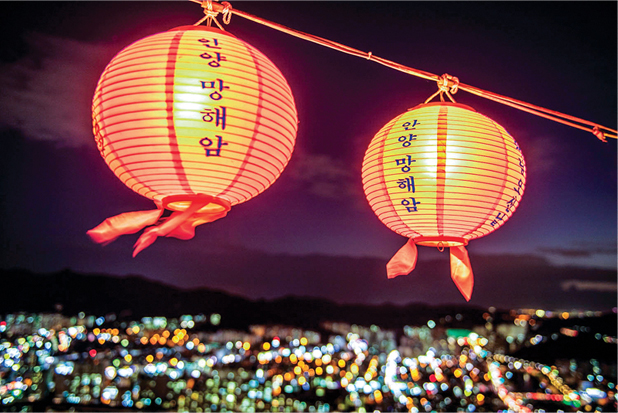 The Manghaeam Hermitage is a traditional Buddhist temple located in Bisan-dong, Dongan-gu. It was founded by a Wonhyo Buddhist monk during the Silla dynasty as recorded in the Bongeunsa Malsaji script.

The name Manghaeam means the ocean view available from a small temple, and on a clear day, the sight of Anyang City and the sunset on the west coast seen from the Manghaeam Hermitage in Gwanaksan Mountain with an unhampered view offers a great scenery like that of a brilliant and entrancing painting. 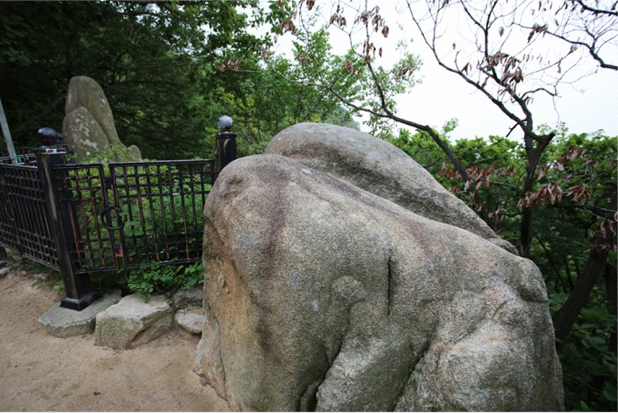 Sammaksa Temple is said to have been first established as a small temple built 1,300 years ago by the three saints, Wonhyo, Uisang and Yoonpil in 677, the 17th year of the reign of King Munmu of Silla, and the name Samseongsan Mountain was also given during this period.

Located in front of Chilseonggak of Sammaksa Temple, "Fertility Stones" are a fascinating artwork of nature, being designated as Gyeonggi-do Folklore Cultural Heritage No. 3 in June 28, 1985.

According to the story that dates back to ancient times, this place had been a subject of worship under the folk religion long before Wonhyo founded Sammaksa Temple here in 677, the 17th year of King Munmu of Silla. Prayers for conception, childbirth, family prosperity, good health and longevity made while touching these stones are said to have been answered, and many people visit this place from all over the country to pay their respects on Buddha's birthday in April and also on July 7th (lunar). 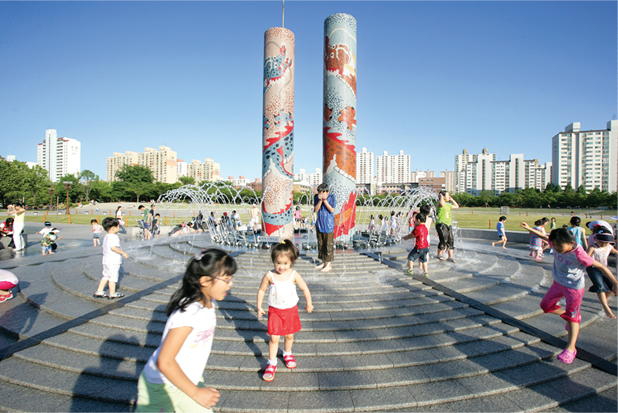 Pyeongchon Central Park contains various landscaping trees and amenities, as well as sports facilities such as a multi-purpose athletic field over the space of 119,843 m². In particular, various types of flowers and trees grown to match each of the four seasons in the park created under the theme of four different seasons (spring garden, summer garden, autumn garden, and winter garden) offers a beautiful scenery, fostering emotional development of citizens and providing a pleasant urban environment.

The park also offers an inline skating rink, X-games venue and a car-free street that allow citizens to enjoy dynamic sports for all.

Pyeongchon Central Park, a resting place for citizens of all ages throughout all seasons, allowing visitors to enjoy trees, flowers, and water all at the same time, and holding festivals for the youth and singing contests for homemakers, is one of the major attractions of Anyang, which contribute towards improving the quality of our lives, and will forever remain as our resting area. 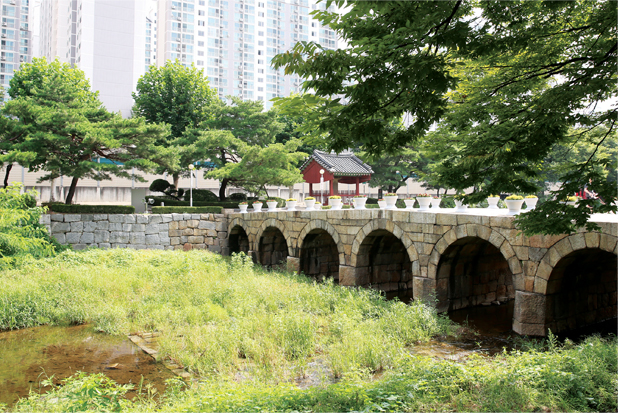 The Manangyo Bridge is a made out of voussoirs and dates back to the late Joseon dynasty, built by the filial Jeongjo of Joseon (r. 1776-1800), the 22nd ruler of the Joseon dynasty, to allow the procession to easily cross the stream for visits made to pay respects to the tomb of his deceased father, Crown Prince Sado, who suffered an undeserved tragic death. It is a highly regarded bridge due to its elaborate construction style of using voussoirs and representing the Joseon dynasty. Each year, the bridge-walking on the Manangyo Bridge takes place and is a representative folk game of Anyang. 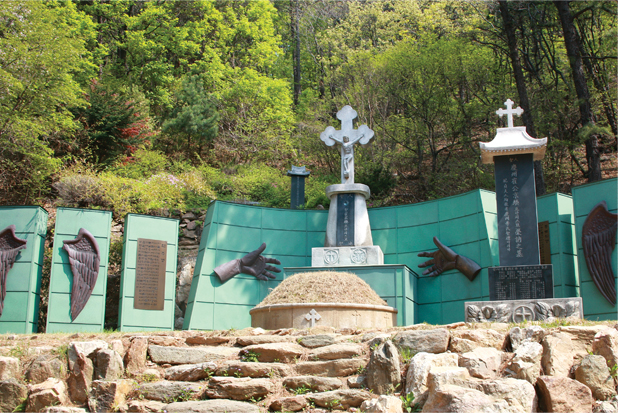 The Catholic Holy Place of Surisan

Choe Kyong-hwan was sentenced to severe punishment for remaining steadfast to his faith amidst torture and appeasement to renegade, and was heroically martyred in Pocheongok on September 12 of that same year.

On July 5, 1925, he named was blessed by Pope Pius X, and was subsequently raised to the rank of saint by Pope John Paul II, who was visiting Korea to commemorate the 200th anniversary of the Catholic Church in Korea on May 6, 1984.

The Catholic Holy Place of Surisan was newly opened due to its designation as a place of pilgrimage in 2000, and a sculpture depicting the sufferings of Jesus Christ was installed along with his family shrine, preserving the history of the early Korean church and the suffering of martyrdom. 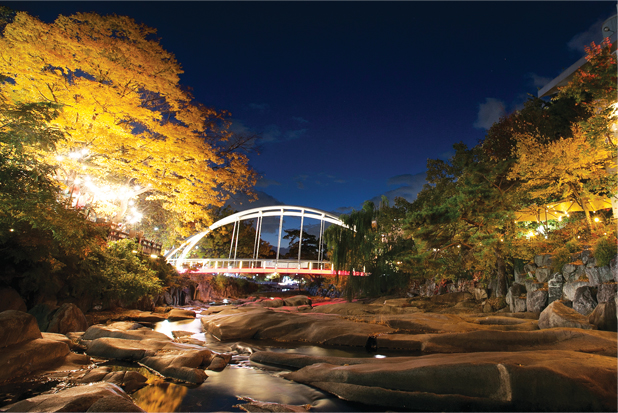 In addition to artificial waterfall, outdoor stage, and exhibition hall, a plaza, walking trail, and lighting facility have been created in the park among others, and 52 artworks of famous domestic and foreign artists have been installed in various spots of the park, including observatory, one-pyeong information center, sky attic, fish tear fountain, etc. as part of the first Anyang public art project on an international level in connection with park construction project. 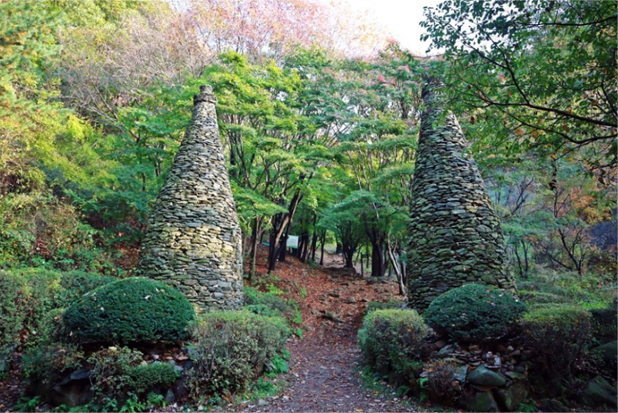 Byeongmokan is the name of the village where the present Anyang 9-dong is located due to its geographical feature of a narrow village entry but a deep and wide valley inside. The valley is long, scenic and clear water flows through the area, attracting many people to enjoy its view.

The mountain that appears on the left while going up Byeongmokan is Surisan Mountain, and although it is not high at 489 m above sea level, the mountain has a graceful shape and it forms several hiking courses along a ridge that extends in an X shape.

A bottle-shaped stone pagoda, symbolizing both Byeongmokan and Surisan Mountains! The pagoda built on both sides in balance to resemble a bottle shape is a landmark as well as a milestone of Surisan Forest Park, which used the surrounding piles of stones to create harmony with nature and artificial beauty. As the stone pagoda symbolizes, numerous stone pagodas appear piled up all over the uphill path leading towards Baekyeong Mineral Spring.

Surisan Mountain as a resting place for citizens stands comparison as the best place for forest bathing along with its unique seasonal characteristics, and the most symbolic place that will have the deepest lingering impression on the visitors’ hiking with their children would be the stone pagoda piled up with unwavering passion and care. 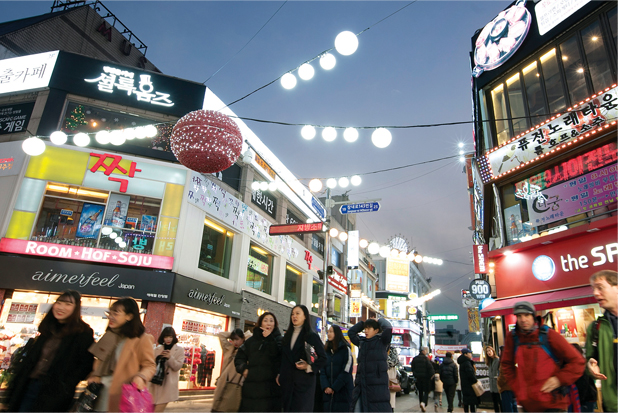 Anyang 1-dong, which transformed into a transport hub stretching in all directions after Anyang Station was established with the opening of the Gyeongbu Line on January 1, 1905, has grown into a downtown area with restaurants, clothing stores and pubs filling up the space one by one.

Then in the 1990s, a large number of casual clothing and national brand stores targeting the youth began to fill up Anyang 1beon-ga, where a perfect business district had already been formed as a transportation hub.

Since 2000, it has emerged as Anyang's largest downtown area as one of the leading commercial districts in the capital area with its street that forms harmony between the shopping aspect, such as computers, telecommunications, and cinemas, and the cultural aspect. The place earned its name, Anyang 1beon-ga (First Avenue), in a symbolic sense of leading the regional development by bringing about the finance, transportation and commercial district in Anyang, and the municipal government names the shopping street as “Anyang 1beon-ga" in 1998.

With Anyang's slogan boasting that it is a city of youth with streets of fashion, Anyang 1beon-ga has hosted the grand festival every October since 1996, offering the citizens many attractions as well as a space for them to feel and experience the flavor of freedom and romance.

Location In the vicinity of Anyang 1-dong, Manan-gu, Anyang-si, Gyeonggi-do